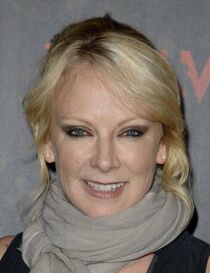 Hannah Shakespeare is a creator, writer and executive producer of ABC's Killer Women. She is the series showrunner.

Hannah Shakespeare has worked in many different Films and Television Shows, such as The Whole Truth, The Playboy Club and The Raven.


In 2013, She decided to create the ABC Drama, that had been picked up in May 2013, titled Killer Women. Shakespeare will also serve as an executive producer alongside Sofía Vergara, Ben Silverman. It will begin airing on January 7 2014. The show focuses on the life of Molly Parker, a recently divorced woman, former beauty queen and a daughter of a sheriff. She rises to the top ranks of one of the most elite and male-dominant law enforcement establishments around: the Texas Rangers.

Retrieved from "https://killerwomen.fandom.com/wiki/Hannah_Shakespeare?oldid=4371"
Community content is available under CC-BY-SA unless otherwise noted.